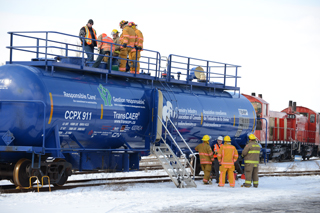 Find out when the TRANSCAER® Safety Train will be in your area.

After nearly three decades of providing a unique backdrop for municipalities, emergency responders, and residents to learn about the transportation of dangerous goods from TRANSCAER® members, TRANSCAER’s Safety Train, the CCPX 911, was officially retired on March 28, 2018.

The TRANSCAER Safety Train was a railway tank car that had been converted into a classroom on wheels in 1990 for the purpose of training emergency responders. It was the first training railway car of its kind in Canada – a concept that has since been adopted by other organizations across North America and around the world.

Every March, the Safety Train would begin its journey across Canada, making stops in communities where dangerous goods travel – from Courtenay, B.C., to Halifax, N.S. This year, when the CCPX 911 arrived in Windsor, Ontario for an outreach event—one of its first few stops of the year—an inspection revealed a fatal crack which could not be repaired.

By travelling to communities, TRANSCAER has established partnerships between manufacturers, distributors, carriers, emergency responders, government agencies and residents – an important first step in preparing for any transportation emergency.

CIAC, the Railway Association of Canada (RAC), and their members and partners were responsible for creating and maintaining the CCPX 911 over the years. The CIAC owned the CCPX 911 until three years ago when it was transferred to the RAC.

While TRANSCAER® members and partners are disappointed the CCPX 911 could not be featured in the rest of this year’s scheduled outreach events, they have been actively working on ways to evolve the safety train program.